The Message Stick Walker: walking 8,000kms to make a change

Alwyn Doolan wanted something to change and he took matters into his own hands (actually, his feet) to make that change happen. One day he got up and walked 8,000 km from the tip of Queensland to Canberra to meet with the Prime Minister. It was long and it was hard but Alwyn did it because he wanted to bring Indigenous people together to work towards reconciliation and a treaty with the Federal Government.

Let's hear from the man behind such a badass move and how he pulled it off.

1. So how did this even happen? You were hanging out with your friends or walking the dog or waiting for your pizza order and this thought just popped into your head: "Hey, I'm gonna walk to Canberra to make a change?” Tell us where this idea came from.

I had just moved back home to Queensland from Melbourne to be closer with my mum after I experienced a spiritual build of self-identity crisis, as I realised that I had no interest to work another 9 to 5 job. I contemplated what I should do and one day, sitting on my mum’s veranda I said to myself: “I will walk from Bamaga in Cape York to Canberra”.

I took it seriously because it was a spiritual guidance that led me to the decision. It was then up to me to accept it or not, and I did accept. I committed my mind and spirit no matter what may come, I just had to believe this was the right thing to do.

3. What did your family and friends say when you told them? Did they think you were nuts? Did they try to talk you out of it? How did people react ?

My family and friends were very surprised and a little shocked, but they were also supportive. Perhaps at first they thought I was crazy but come the day I began my journey, they had realised I was dead serious about it.

A lot of people could not fathom doing something like this.

4. So now you've stood your ground, you've turned the question around and around in your mind, how did you come up with a plan?

While looking at the map, I thought to myself that I wanted to visit as many communities as I could along the way. I had rough plans of the route and the dates of when I wanted to be in Canberra. I looked at my previous hiking experiences and what I would possibly need to carry. I didn’t have a plan of how far I'd walk each day but knew it would take me roughly seven months. At that time, I knew that sleeping under the stars was part of the commitment which I had no problem with. 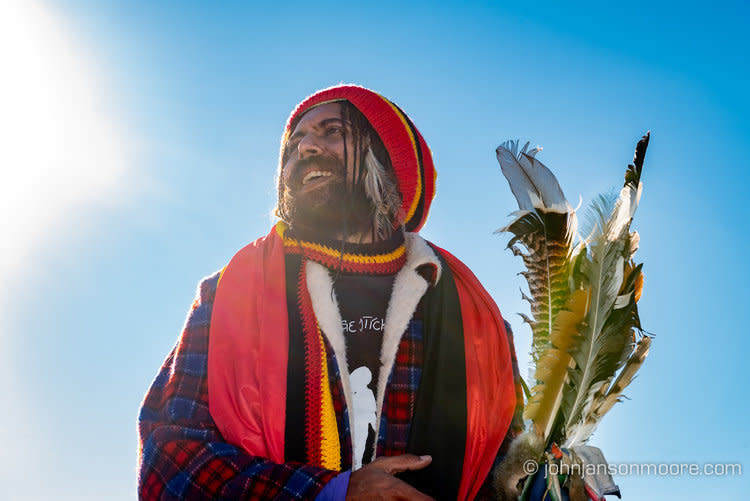 5. You took three message sticks. Why did you carry three and what is the meaning behind each?

I decided to utilise an ancient custom of Aboriginal law, carrying message sticks as a communication tool. I decided that the way forward for me was to embark on a long walk on country, reconnecting with the songlines of my people and carrying this declaration of healing to the Australia government.

The message sticks are both an invitation and a challenge to embrace the ancient sovereignty that has long been denied to us and which is the irrefutable bedrock of our nation’s identity. They refer directly to discussions about constitutional change that we will establish in the years ahead, acknowledging recognition, the republic and truth-telling.

I carried three messages sticks as a part of the story of the Australian continent. Each one is different but together they make the story. They are: creation, colonisation and healing.

6. What did you hope to pass on and communicate at the end of your journey?

I wanted to inspire the next generation so they can be proud of who they are and be guided by their culture.

The main target of the Message Stick Walk is to inspire them and bring that awareness across to them, and bring them back to basics with our culture by simply walking where our ancestors did in these lands.

7. What was going through your mind all this time? Did you get nervous, anxious, or scared at any point? And how did you handle those feelings and stick with the plan?

I did get nervous at times leading up to the beginning of the walk. There was a lot of frustration from being let down by people who did not believe that I was capable of doing something like this. I handled it with the support and kindness of friends and family. I trusted in the belief that things happen for a reason, so I believed that I was on the right path.

8. Was it hard to say goodbye to your family and friends? How did they react?

I’ve always been a traveller. I’ve always been the one to move about places in my family and when it came to say “see ya”, it was all very positive knowing I’d see them soon or along the journey.

I remember as I started to walk I said to myself, “You’re really doing this” and I kept repeating it over and over. It felt like this amazing, spiritual release of a new person embarking on a journey and everything felt right within that moment. I felt the ancestors and my mob walking with me.

10. And what did it feel like when that first excitement and frenzy wore off? Did you start to have doubts? Did you feel lonely? Did you feel nervous? How did you handle those feelings?

I wasn’t so much lonely, rather that I wished I had someone to share emotions and conversations, instead of my own thoughts going around and around in my head. I wrote my feelings down to let go of my thoughts.

11. What were you carrying with you?

I had two backpacks full of food, a tent, 35 litres of water, a journal, an emergency kit and a few valuable items to remind me of home. All weighing up to 60 kilograms.

12. What did you see around you as you walked - the most beautiful thing, the funniest thing, the most heartbreaking thing, things you discovered?

I saw everything at walking pace. You get to take it all in. The further south I travelled, I saw the landscape change in all its beautiful forms. The most beautiful thing I saw was probably a range flow into a spring near the Qld and NSW border, it was a feeling of peace and that no one had been here for years or decades even.

The funniest thing is the time I stumbled across a nudist camp. Long story short, I came across two young boys while walking. They offered some fruit and one of them invited me to meet his father. He took me into the village in a rainforest and everyone was naked.

The most heartbreaking was to see and feel the land being destroyed by mining companies in the arid parts of NSW, and the few times I saw kangaroos or birds get hit by cars. 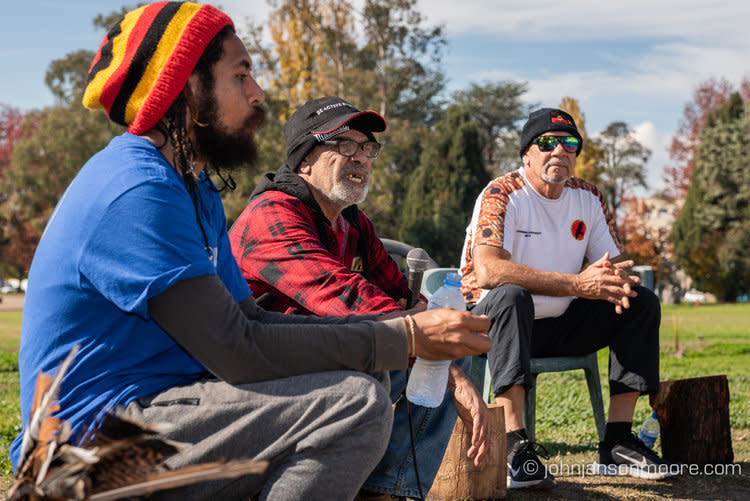 Most of the time I was alone. Before entering a community, I would call the local land council and make connections and find contacts to reach out for support.

I also met with Elders and respected people of each area I passed through and learned the common issues faced in each community, and I learnt the most important stories of creation to their nation and people.

A typical day would be a 3am or 4am wake up call to pack up my belongings, eat, and begin walking before sunrise to trek as many kilometres as possible. I would stop around 11am to break for four-hours then prepare to walk until the sun began setting.

I would talk out loud to country and them old spirits to let them know who I was and that I was setting up camp.

I fell asleep by 8pm. Then repeat. 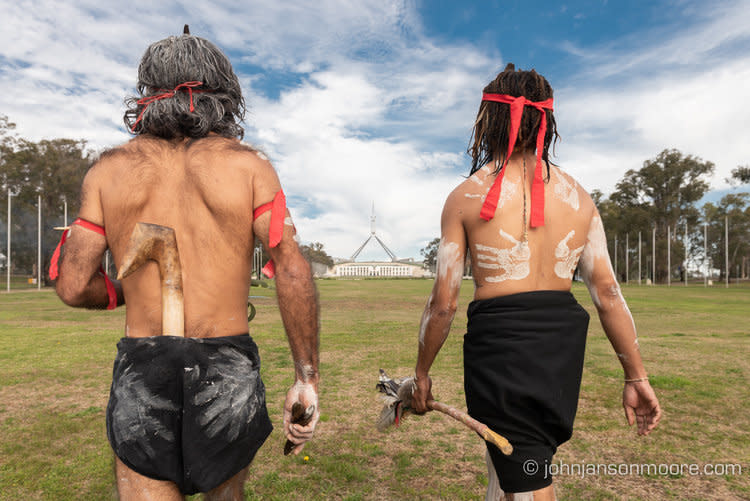 15. And then Canberra: how did that feel to have arrived?

Arriving in Canberra was unbelievably emotional. My mind was running through the memories of hard times on the road and the good times. I had envisioned that day for a long time and it was so surreal that I made it. I wanted to cry but I also wanted to jump for joy.

16. What was your plan - to walk straight up to Parliament and ask to see the Prime Minister? And tell him what?

The plan was to arrive and to celebrate my achievement. I wanted to give myself space to just take it all in for a moment.

Then, two days later, I would walk up to Parliament House and release a statement of intention that I would be awaiting the new government to be sworn in. I didn’t want it to be on the government's terms. I planned to set a date to address the whole Parliament, to deliver the full-notice and three Message Sticks.

17. How did that go? How did you feel afterwards?

It went well. Even though I arrived on election day, it did not take away from what I wanted to achieve with my Message Stick Walk.

I felt a massive weight lift off my shoulders. I had a renewed strength and determination. I am now waiting to form an alliance with community and spread the word. 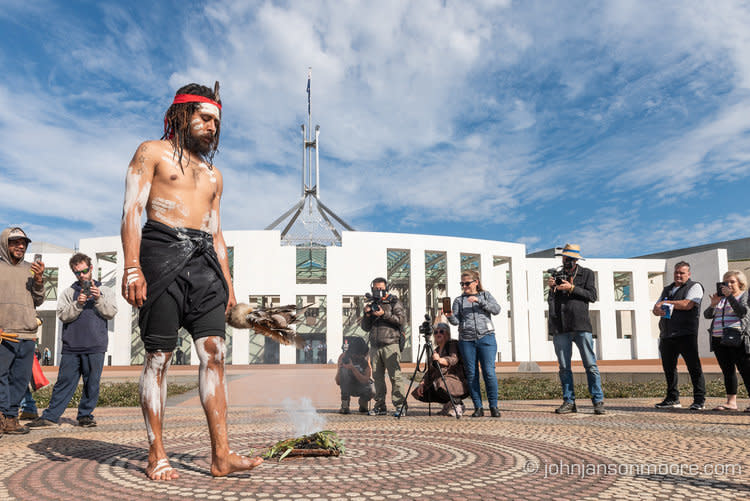 18. What's the single most important thing you're taking away from this?

For me, it has always been about the benefit for my family and for the people. I want to leave a trail of inspiration for our people and showcase the important issues that need to change.

It is just like Paul Kelly’s song ‘From Little Things Big Things Grow’. It’s important to have and share kindness no matter how big or small. If you plant a seed and give it kindness it can grow to its best and flourish. This is what is needed and is important for us as humans.

Yes! I would and I would go even bigger, just for the challenge.

Alwyn Doolan
keyboard_backspace Back to Stories