Christmas Island is where I learnt the most valuable lesson of my life, the act of human kindness. I was asked to interpret for the Australian Federal Police while they intercepted a boat. One of the Deputies asked me, “when was the last time you spoke to your family?” I replied “just before I left Jakarta”. The Deputy told me that he was putting his job on the line, pulled out a satellite phone and asked me to sit on the ground. He told me to call my family.

To this day, I am truly grateful to this man. His decision changed my life and that of my mothers. I now live by the principle that should you ever get the chance to help someone, to do it, because you may never get another chance.

I’m Munjed Al Muderis, and this is my story.

As a young adult I very was happy living in Baghdad, Iraq working as a surgical resident until the moment when everything changed.

I was operating at Baghdad University Hospital when I was confronted with the most difficult decision of my life. Three busloads of army deserters arrived, escorted by republican guards and Ba’ath party members. We were ordered to abandon our patients and to start mutilating the soldiers by cutting their ears off. Our Head of Department refused and was executed. I was told that if I shared the same view than I would face the same fate, death. I only had one choice, to flee.

A terrifying journey through several countries led me to board a leaky boat with 165 people vertically crammed like sardines.

I was eventually moved on from Christmas Island and detained for ten months at Curtin Detention Centre. This experience can only be described as inhumane, being stripped of my human identity and known as a number 982. As a consequence of speaking about human rights I was singled out as a troublemaker and detained in many Australian prisons. Western Australian prisons were like heaven in comparison to the Curtin Detention Centre.

I was finally released from Detention and managed to have my visa issued on 26 August 2000. On 1 November 2000, I received my first pay-cheque as a Doctor.

I worked hard to become an Orthopaedic Surgeon specialising in hip, knee and trauma surgery but my dream since the age of 12 (after watching the terminator) was creating half-human half-robots. I’ve now helped more than 500 patients through a robotic technology known as Osseointegration. An operation that inserts a metal implant directly into an amputee’s bone, which connects to an artificial limb system allowing patients to restore better mobility and quality of life. 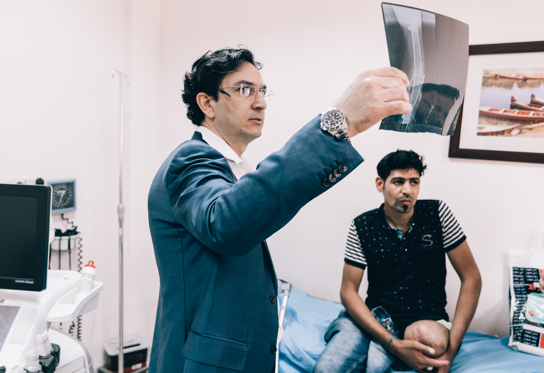 In 2017, Prime Minister of Iraq Haider al-Abadi invited me to return to my birth country to receive an award for my achievements in Osseointegration. I was honoured. This became an opportunity to build relationships, reach out in kindness and to help those who have suffered at the hands of war and terrorism. I made it my mission to assist amputees, to change their lives for the better and to help the amputees of Iraq regain their independence.

Since 2017, I have returned five times operating on over 300 patients.

From the many experiences in my life I have learnt the importance of treating others how you want to be treated. I hope that one day we will live in a world that respects and tolerates each other no matter what our colour, religion, sex or race. To live in a world of kindness.