‘It’s human to put others first isn’t it?’: when self-kindness takes a backseat.

For years I’ve been puzzled by one particular section of the safety briefings on aeroplanes. I could never understand why you’d put your own oxygen mask on before helping others. I mean it’s human to just put others first isn’t it? Life was going to teach me that's not always the wisest or most helpful thing.

I lost my vision when I was six months old when blood vessels burst in the back of my eyes causing my retinas to detach. Being blind has been the only thing I’ve ever known. I’ve got almost next to no recollection of the things I saw in those six months. The images I can remember like trees, the colour red and white hospital walls, are very sketchy. I’m not even sure the red and white I remember is what other people see when they look at those colours.

At school I struggled to read braille. It left me feeling stressed and stupid. I had teachers call me lazy or tell my parents I needed to try harder. When I was 10, I was diagnosed with Charcot-Marie-Tooth; a condition that causes muscles to waste away, poor balance and a lack of sensitivity. That diagnosis, while a shock and a total double whammy for someone who already couldn’t see, was a relief. It meant there was a very good reason why I was struggling and could now seek the support I needed to turn things around.

And things did. My school employed a support teacher who introduced me to audiobooks and screen reading software called JAWS. The robotic sounding voice scans everything on the computer screen and reads it out aloud. The speech program helped me go from being one of the lowest performers at school to dux in Year 12. Apart from the academic success, the technology gave me self-esteem, the ability to communicate online, the confidence to advocate for myself and a commitment to help others with disabilities.

In 2013 I started my job as the world’s first blind newsreader, at Australian youth radio station triple j. I had no idea that overnight I’d also become an advocate and mentor. It all started with an email from a university professor in the UK. He wanted advice on how he could make his tutorials more accessible for a student with a vision impairment. I was so thrilled to be able to provide support and lessons from my personal experiences.

The emails continued to flood my inbox. There was the mother whose daughter was struggling to cope with losing her vision at age 13, the student who had social anxiety and couldn’t leave the house, the teacher who wanted to implement disability awareness training at their school, a parent struggling to deal with their one-year-old’s vision impairment and journalism students with and without disabilities who wanted advice.

I wanted to help them all. The requests for public speaking then began coming in. 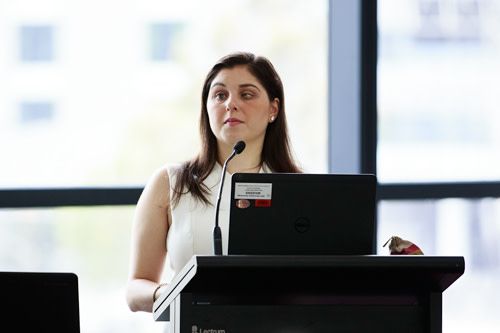 Speaking from experience: Nas shares her own life journey with others. Source: Department of Foreign Affairs and Trade website.

I’ve presented at hundreds of schools, conferences and fundraisers on everything from self-advocacy, accessible travel, inclusive education, trauma, resilience and the importance of empowerment and leadership for women.

I regularly found myself working seven days a week. I’d go from the studio to a presentation to a mentoring session. Some of it was paid, but most of it wasn’t. I loved every minute of it. It was such a delight to have a timid teenage girl go from one of the quietest in the class to hearing her give a speech after one of my public speaking workshops or helping a student with a disability transition from primary to high school with confidence. And there’s simply no better feeling than having someone come up after an hour-long presentation you’ve given and hear that your story has changed the way they perceive people with a disability or that you’ve taught them how to tackle a challenging situation.

I’ve always been very self-aware. One morning I woke up and didn’t feel like leaping out of bed like I always did. Everything ached, I was abnormally uninterested in the things I’d planned for that day and I found Facebook posts about events I’d been invited to and wished I’d made time to attend.

I had been spending so much time helping everyone else but I’d forgotten to look after myself. It wasn’t anything specific that tipped me over the edge. It was just a general feeling that while I was still balancing all my important commitments, I wasn’t really giving my all to any of them. I’d become someone who had to always be doing something. When someone called, I’d run. I had been putting things I loved doing on hold because I felt like my spare time could be better spent supporting others.

In the last few months I’ve started making simple changes. I do yoga three times a week, sleep longer, cook more and try not to feel bad about saying no to events if I need time out. Those few changes have improved my mood and actually made me more productive. I’ve reduced my work load slightly, but I approach those tasks now with a renewed energy and fresh ideas that ultimately benefit the people I work alongside.

Learning to put my own oxygen mask on first has been one of the hardest lessons. But sometimes to be kind to others you also need to be kind to yourself.

Nas Campanella
keyboard_backspace Back to Stories