In our day-to-day lives, it’s easy to get caught up in our list of to-dos and tasks. We’re all plodding away toward our end-game goals -- yet it is in this pursuit that we often miss our true destiny. Small moments of connection can be life-changing, and I believe if we truly slow down to hear one-another and experience life fully, we can find our greatest moments of insight and inspiration.

Seven years ago, an encounter with a homeless veteran changed my life and jump-started an obsession that would lead me on a mission to feed millions and shift the way businesses think about food waste.

As a student at U.C. Berkeley, I was driven toward one goal: to become a doctor. I had held the goal to become a doctor since the age of two, and now I was on my way to fully realize this dream. I was working my way through NROTC, Naval Reserve Officer Training Camp, where I was training to become a medical doctor in the U.S. Navy.

This would all change with a simple moment of connection during my junior year.

One day, I was walking down Telegraph Avenue in Berkeley, and I encountered a homeless man begging for food. Something about him compelled me to stop and invite him to join me for lunch. After sitting with him, I learned that his name was John and he had just come back from his second tour in Iraq. He was waiting for his veteran benefits to kick in and he had not eaten in three days. That hit home for me. How could someone who had selflessly sacrificed so much for our country come home only to face another battle, that of hunger?

Meanwhile, right across the street at the U.C. Berkeley dining hall, thousands of pounds of perfectly edible food were being thrown away. This seemed fundamentally wrong to me. It was a very stark reality of those who have, and waste, and those who are in need, and go hungry – and these groups of people existed right across the street from one another. I realized hunger is not a scarcity problem, it’s a logistics problem.

I thought, there needs to be a solution for this where people who have food could say “We have food” and people in need could say “We need food,” and we could match these two people and clear the marketplace. And that’s essentially what I went on to build -- a company called Copia that would help businesses redirect their excess food away from the landfill and into the hands of people who need it. 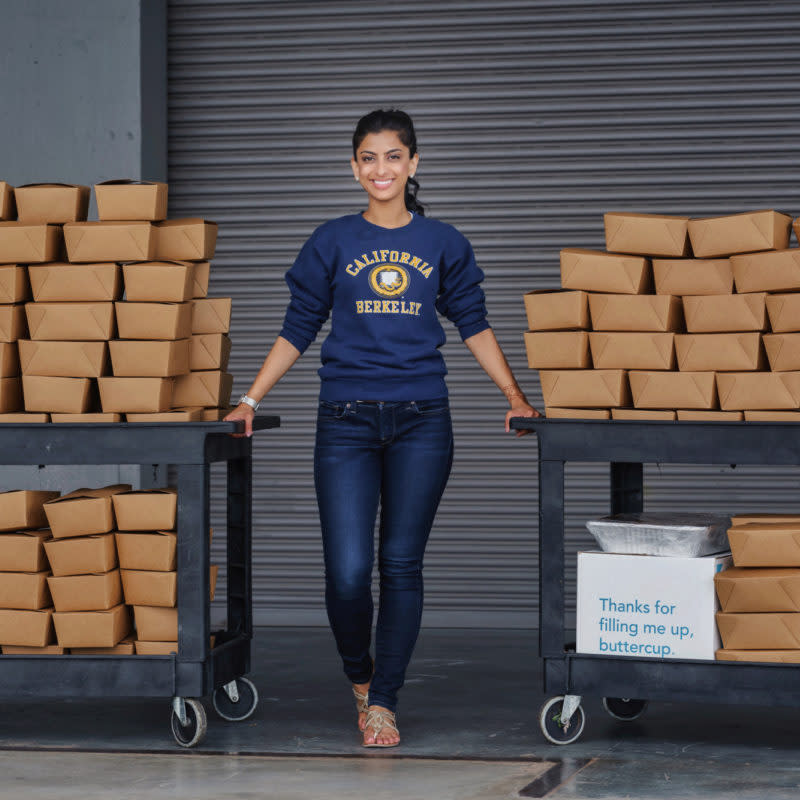 Since my initial concept for Copia as an undergraduate student, we’ve come a long way. My team has developed a tech-enabled platform built with insights gleaned from kitchen operations and food waste experts. Now, we’re not only helping businesses feed the community through a seamless, tech-enabled donation process, we’re also helping them reduce their food waste with powerful data-driven predictive analytics to reduce over-purchasing and overproduction. We’re changing the way businesses approach kitchen operations to make eliminating waste and feeding the community financially lucrative -- and this year, we’ll feed more than 2 MILLION people with food that would have otherwise been wasted.

All of this started with a simple moment of connection, and of course, the courage to move away from the future I had planned for myself. By sitting with John, I was able to shift my perspective and see a future greater than the one I had been moving towards for 20 years.

Trust me, you don’t want to miss out on the chance to make a connection and change your mind -- it could change the world in the most beautiful and impactful of ways.