Eighteen years on from 9/11: what the world has learned

Tayyaba Khan is a leading voice for the Muslim community in New Zealand. She is the founder of a Muslim women leadership network and is New Zealand’s Ambassador for Peace, European Muslim League. Here, Tayyaba reflects on the recent disaster in Christchurch and how 9/11 forever changed her life trajectory.

When two planes flew into the World Trade Centre in New York City on 11th September 2001, it changed the trajectory of my life all the way in Auckland, New Zealand.

In 2001, having recently dropped out of law school to pursue a mental health degree, little did I know that an event somewhere else would make not only my qualification a universal calling, but make me question the very core of my faith identity.

September 11 for me kickstarted a journey in establishing the Young Muslim Women’s Association, alongside other organisations, with the vision of supporting and nurturing Islamic identity and values among Muslimahs in the Auckland region. In 2005 our work was recognized as we won the Sonja Davies Peace Award handed to me by former Prime Minister Helen Clark in parliament.

Prior to 9/11 I knew what most Muslims know about their faith: we believed in the oneness of God, we prayed five times a day, we fasted in the month of Ramadan, we aimed to go to hajj once in our lifetime and were obligated to give charity.

I thought I had understood my faith well, but unfortunately a tragedy like 9/11 meant so many who were working on just perfecting their five key tenets of Islamic faith were now forced to feel the pressure of knowing everything else. The expectation and emotional labor post 9/11 meant all Muslims became scholars on all things Islam.

Eighteen years on with the Christchurch terrorist attack on 15 March 2019, I am seeing the next generation of young Muslims go through this very dilemma all over again, once more the victims of hatred for the faith they belong to. 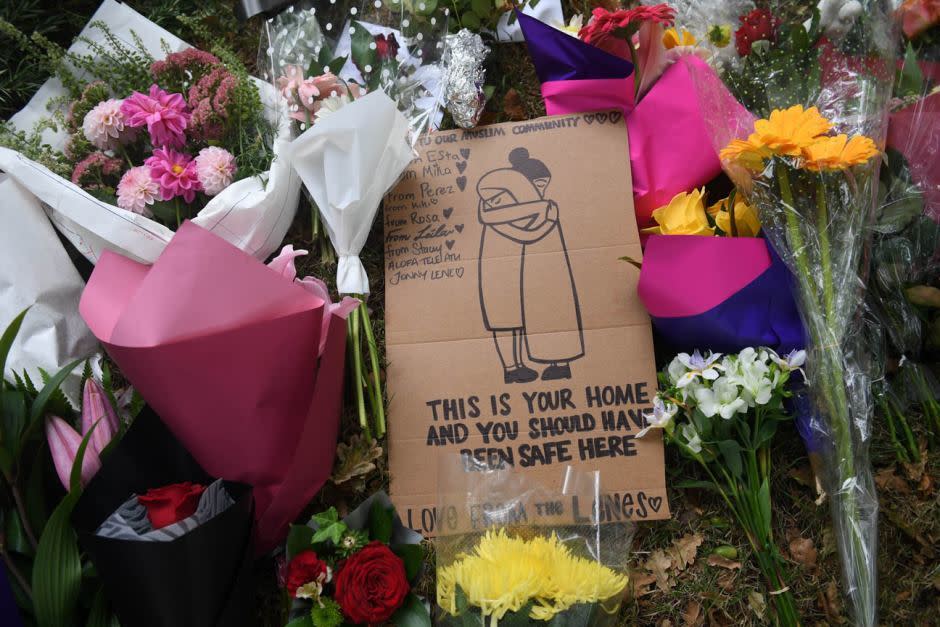 A note left at a memorial for the victims of the Christchurch terror attacks. ABC News: Brendan Esposito

Most people would remember where they were at that exact moment when every media agency was covering the twin towers as they collapsed to the ground. I was getting ready to go to university in my bright coloured hijab. I still remember my entire family glued to the television in the lounge, having just woken up. My father, a man who is mostly serious in his demeanor looked broken and worried as he asked me to stay at home that day, for he feared for my safety. I vividly remember my youthful courage and naivety as I told him that I had nothing to fear, that 9/11 had nothing to do with us.

That rings true till today; 9/11 was not a reflection of all Muslims, but eighteen years on the world has been conditioned to believe otherwise.

Little did I know, back then, that every step my parents took to raise me was going to shape how I responded to events such as 9/11 and now the Christchurch terrorist attack.

I have had the privilege of growing up in three different countries: Pakistan, Japan and New Zealand - a citizen of the globe. But global citizenship is a first world concept, and what I know now as a person of colour who has mostly grown up in the Western society of New Zealand, that global citizenship is not synonymous with tackling the problems of xenophobia, bigotry, racism and discrimination. The learnings around carrying myself through these challenges are ones I have gained from my parents and the world they gifted to me.

As we move from one generation to another, our biggest act of kindness is to “live like good ancestors” * . It is our responsibility to be meaningfully engaged, and not willfully ignorant; reflecting on what our actions today could mean for the generations to come tomorrow.

I have come to learn that one of life’s biggest lessons in a globalised world where it’s assumed that travelling or volunteering somewhere makes you open and tolerant can also make you regressive and closed to diversity. The solution is in reflecting on your fears of the ‘other’ and challenging yourself to engage in the world of diversity on a daily basis.

In the immediate aftermath of the Christchurch terror attack, the New Zealand media showed great respect in coverage and approach of how they centered the Muslim community. However, now, there is simply a deafening silence. For me this suggests the tension of moving away from having painted Muslims as the ‘bad guys’ for so long, that the media is struggling to shift from that narrative. The community aren’t being talked about, and no they aren’t being heard either. There shrouds over us all, the shock and despondency as we all consider what next.

As a media spokesperson for the Muslim community for several years, I learned to have a voice. My purpose came to be a voice that paves the way and encourages others to use their voice. This felt like the act of kindness I could leave behind for those to come. Eighteen years after 9/11, this remains my purpose. Today, I am part of a global Muslim women’s leadership network which aims to encourage Muslim women to lead, through building their capacity to unite community using the Islamic framework.

I want to leave the world knowing my footprint will leave behind a pleasant world. “Pleasant” is one of the many interpretations of my name, the mission I carry or battle with as I walk the earth.

Tayyaba Khan is the founder of the Khadija Leadership Network, recipient of the Sonja Davies Peace Award, and New Zealand’s Ambassador for Peace, European Muslim League.