Be kind to each other, Darlings

Emotion is a funny thing and it seems to have been holding my heart, very tightly, my entire life: "Deb, you are too soft," "...such a sook," "...overly sensitive." It’s who I am, so I guess it comes as no surprise that at our recent Annual General Meeting, I was once again grabbed by that emotional squeezing.

I can almost feel you scratching your head and wondering what on earth would happen at an AGM to make anyone feel emotional?

Well, at the end of the meeting, AIME’s Founder, Jack, thanked me for the years I had given my all to AIME and for the love and support we have shared throughout our journey together. I was then presented with a framed ‘Heart’ tee-shirt, accompanied by the following text:

"This is to recognise Deborah Kirby-Parsons’ 10 years as a mentor with AIME. ‘Mother of AIME’ and saint who dropped a long-term job to take a punt and join us on a two-month contract back in 2008. She is a true hero in the AIME story. May history remember you Deb." Jack Manning Bancroft, AIME CEO & Founder 2018 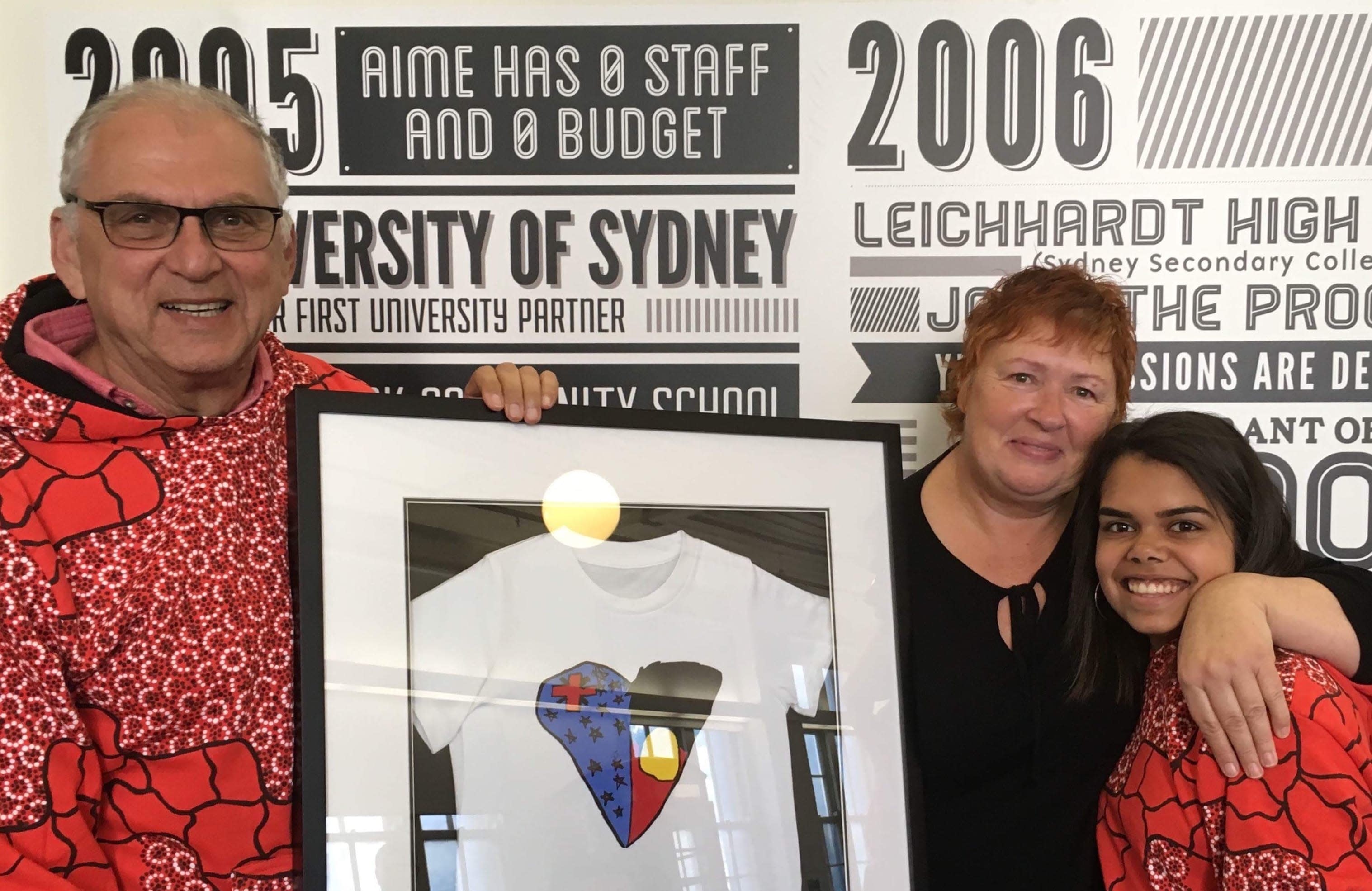 You would have been emotional too, right? Jack then asked if I would like to say a few words to the Board members, reflecting on my years at AIME.

As I began to speak about how much had been achieved since the early days of AIME, I was flooded by memories and could feel those dreaded emotions gripping me. One sentence had barely left my lips when my chest contracted and my throat tightened. To stop my head from falling forward into my hands and stymie the whole body sob that threatened to burst out, I thought I would make a joke about the AIME bucket hat I’ve been dreaming of for years. Bad timing, bad joke and it’s fair to say, it didn’t get many laughs ... but it did stop that sob.

Our young people are our future – your future, my future and the future of the generations that follow us. We have to change the way things are or we may end up with a future that none of us will be proud of.

You may have read about my involvement in AIME in The Mentor, a book Jack wrote about his early life and the beginnings of AIME. But for those of you who haven’t, I must say that this has been a remarkable journey from day one.

My primary task for the first couple of months of being one of AIME’s first employees was to source funding to keep the program running, but also so Jack and I could be paid. We were seriously scratching around for funding. We had no AIME phones and our personal mobile bills were reaching giddying heights, remembering this was back in the days before ‘bundles’ and ‘unlimited plans.’ So, basically we hoped to be paid some kind of wage so we could cover part of those mobile bills – otherwise we would have been trying to run things phoneless!

Around that time AIME became a charity and a corporation and we were setting up our very first ‘proper’ office in two windowless rooms in the basement of the Wentworth Building at the University of Sydney, courtesy of the Student Union who generously leased the space to us for a miniscule annual fee. We finally had a secure home base, which continues to be the administration hub for our USyd program today.

The year of 2008 was when we also developed a short but close relationship with eBay – it was the only place we could get a board table and eight chairs for $45 and sell signed footy shirts and other bits and pieces we found in neglected boxes and dusty corners at home, to fund supplies for the program and the office!

But when you find something that you truly believe in, that you know is going to make an enormous difference to people’s lives (your life too), you just do whatever it takes to make things happen. And we all did what we could for AIME and more importantly for the kids who came along to the program week after week.

There were moments along the way when we thought it all might go under – but someone did something or said something that would either give us the capacity to keep going or make us more determined not to give up.

So every year after 2005, AIME extended its reach further around the nation. To more communities and schools, working with a growing number of kids and inspiring more university students to put up their hand to become mentors. Those selfless individuals who gave their time and themselves to do what they could to make sure another young person – someone they had never met before coming to AIME – had greater opportunities available to them once they finished school.

They fuelled the fire inside AIME with their kindness.

When I left my job at the uni to join Jack, I didn’t really think too much about what I was leaving. I also didn’t think too much about what I was gaining. I could never have imagined what AIME would give me ... immeasurable, heartfelt joy when students reached their tipping point and no longer struggled at school; being overwhelmingly humbled by kids or their parents who wrote to say thanks for being there; goose bumps galore when watching students, who previously didn’t utter a peep in class, suddenly jump up in front of their peers and perform in AIME’s Got Game or deliver a heartfelt speech for The Other Election; and an enormous sense of pride in the thousands of kids who worked so hard to get through school with AIME by their side.

So many wonderful moments like these have filled my heart to overflowing.

It has been an amazing journey and I am so grateful to have seen AIME grow from nothing to something – something strong and positive, something that changes lives, something that will be around until it is no longer needed. From those nights spent frantically photocopying program session notes at the Koori Centre at the University of Sydney with the very first group of mentors sitting on the floor around me, through to working on the recently published book of Kindness Stories from 2017 that are evidence of our limitless ability to be thoughtful, caring humans. It has been an honour and an enormous privilege to be part of this amazing thing called AIME.

The door may have closed on my chapter as an AIME staff member, but there will always be a door to my heart with the word ‘AIME’ emblazoned upon it.

Be kind to each other, my Darlings.